If you’re a creative (and whether you know it or not, you are), exploring that creativity is often the root of fulfillment.

But producing creative work doesn’t guarantee value for others. Sometimes your art is “useless.” Still, if you’re doing things right, creative work isn’t for others, it’s for you. But that’s where part of the problem lies:

What does it mean to answer the call of creativity? Read on. 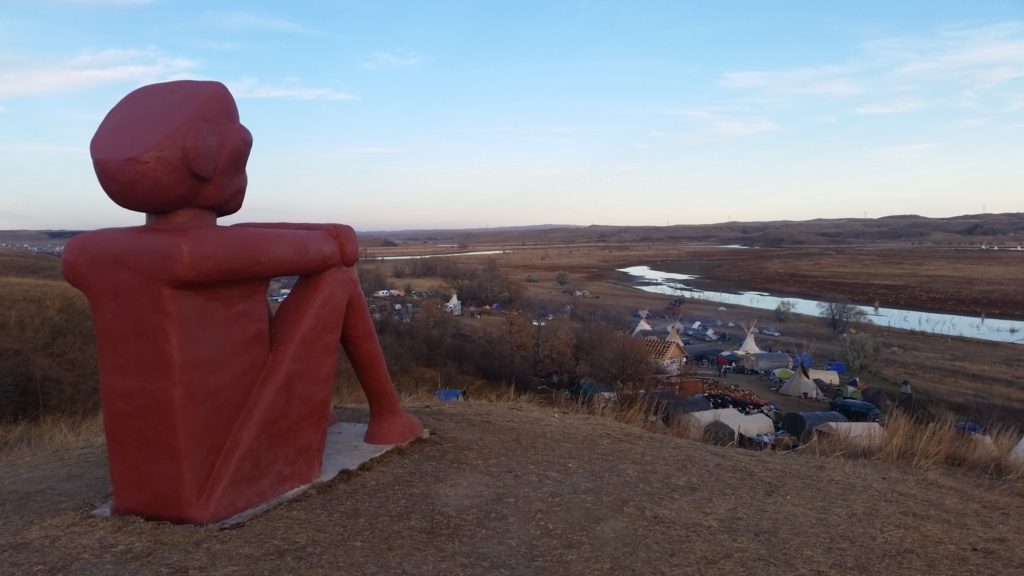 “Not Afraid to Look” a sculpture created on-site by Charles Rencountre of Santa Fe, New Mexico. Talk about Creative Work!

A Primer: Standing Rock and Creativity

I understand the desire to hole up and just create stuff. It’s heaven. That was my plan after returning from a month of housesitting in Italy last week. And yet … Standing Rock is happening.

The nutshell version of this catastrophe is that an oil pipeline is planned to run through the veins of land expressly (and legally) “given” to Native Americans back in the 1800s. (Irony, much?)

Since then, the land has been taken back by the American government and resold to private, non-Native owners. An extended series of deception—let’s binge-watch this one, boys and girls!

The thing is, oil pipelines leak. Pretty much every time. They win the superlative for Most Poorly Engineered Thing Used Way Too Often by Smart People. (Yes, touchscreens in cars nearly took the prize.)

That’s an entry-level description of what’s going on, but read more about essential protest facts from Heavy.com  and get Standing Rock updates here.

So … centuries of outright deception by the culture I call my own had me feelin’ the need to do something to show my solidarity with the First Americans. Standing Rock was that chance.

What does a national crisis like Standing Rock have to do with creativity? We’re getting to that. But first, time-travel:

It’s a week before I embark and I’m shouldering the secret embarrassment that I hope something prevents my departure.

I have a book to finish, a blog to establish, stories to edit! I have no income to support my “creative responsibilities”—shouldn’t I remedy that before lacing my protest boots?

Yet no reason arrives, so I hop on a plane to meet mom in Sioux Falls (she’s the only person who responded to my Facebook call for co-protesters … genetics!) and we road trip the final 10 hours. 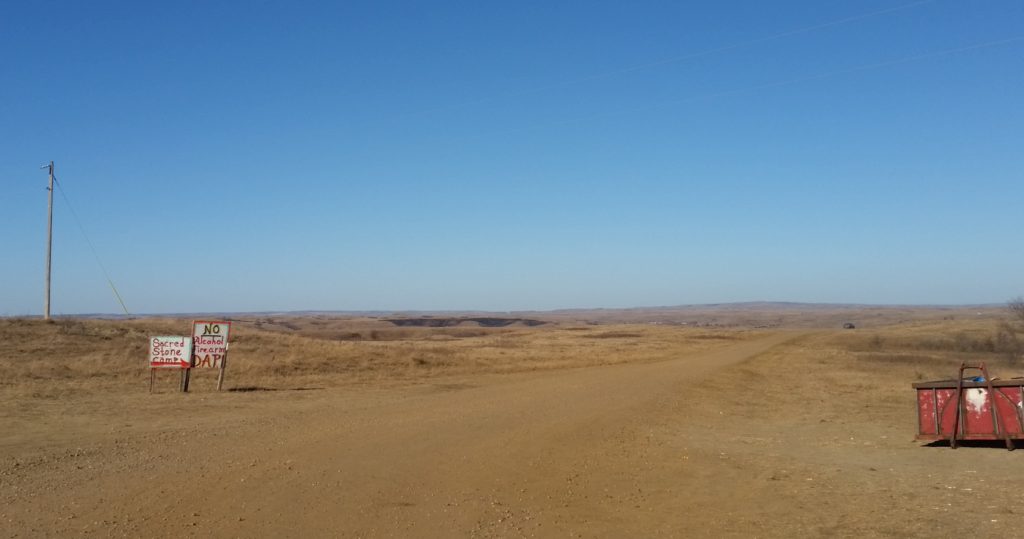 (So, Megg, you want to talk about responsibilities? Books, blogs, and stories? Hello! They’re destroying earth over there! Irreparably. Undeniably.)

We arrive at Standing Rock Reservation and see it in the distance: a big, blue profit-seeking pipe. It lies across the river, halted atop a stretching plateau of dirt and snow, waiting for the go-ahead to plopped into earth and start screwing us all.

Oh, you don’t care about the environment so much? You’ll be fine with that Dasani? Fine. While you’re contentedly not watching your tap water catch fire, perhaps you can create a little heartspace for the entire way of life effectually wiped out by the disease and greed of white settlers.

[But you have to stay home and work on your passions? But you can’t donate to Standing Rock because you’re broke (but subscribe to Netflix)?]

I know, what’s done is done. But forgetting is for grandmas. We must remember. (Sorry, mom/grandmas! You know what I mean).

Yes—creatives need to create. They should create. But why not use creative resources to give back?

I did my best to give back at Standing Rock, both with my physical abilities and my creative ones. Did I make a difference? Doubtful. We’ll talk about that more later.

But I did realize something about the importance of creatives coming together to make something greater than the sum of its parts. I saw a world being created, and that world needed every type of person, every type of creator. From single mothers giving their children a community, to journalists, to fight-hungry tribe members, to peace-seeking tribe leaders, to families of all colors, anarchists, liberals, and people just trying to find a way to help.

Standing Rock taught me that creative work must intertwine with creative responsibility.

What do creatives thrive on? Connecting with new people, collecting interesting stories, seeing beautiful and unusual things … you get the gist.

It’s why many of history’s great geniuses came from big cities—not small, sparsely-populated areas. Life experiences are input for output.

The more experience you accumulate, the more capable you are as a creative thinker.

2. Giving back makes you a better creative

People who give back are healthier and happier. That, darling, is a fact. The starving artist concept is nonsense. 90% of the time, happier people make better work.

Creative work aside, you’re happier—is that not an end in itself?

3. Your creativity provides what no one else can

Your individuality may be the most important component of all. For a creative, the trap looms large to say “Oh, I’m just not a volunteer type” or “Service is for Volunteers/Type-As/Extroverts.”

But part of creative responsibility is giving where it is needed, not just where it’s easy.

We humans are part of something much, much bigger than our individual output. I’m talking about The Big-L: Life—how the odds of your existence at all are practically zero.

You’re a creative. You see things differently than others. Put that vision to use in amazing ways. 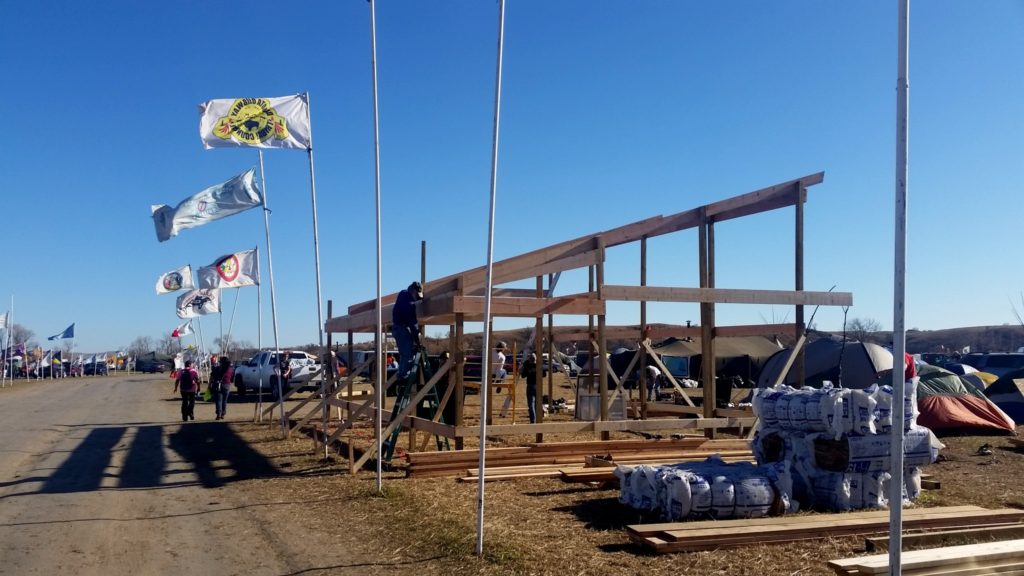 I’m on this quest to find myself as a creative, and the truth is that I often felt useless at Standing Rock. The protesting had come to a standstill and people were waiting, restless.

In the meantime, they prepared for winter, building structures and preserving food. Jobs seemed accounted for, people seemed busy. What could these soft writer hands build or render?

So, I listened, I watched, I tried to be there.

I heard campfire stories from the grandchildren of Natives who felt like they had found a home for the first time in their life.

I heard Lakota leaders inspire crowds to remain peaceful, to cross no lines unless certain the directive came from agreement between leaders of the six main tribes represented there.

I heard the drums of pipe ceremonies and stood on the edges of a wise and flagging culture that refuses to die.

I saw children roam parentless and find smiling mentors to show them how to build a fence or fire.

I saw a single mother relax because she knew her son was safe and would be fed for weeks.

I saw a world being built, piecemealed into existence. I watched people from all walks of life come together because they believed in one thing: we must protect the water. 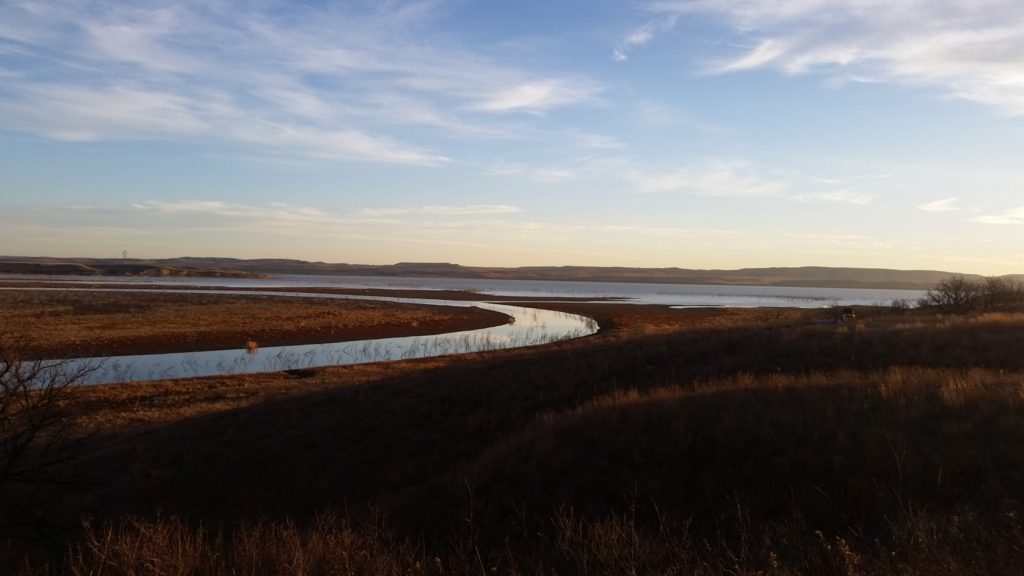 I was lucky to hear a loud horn announcement seeking someone to scan the surrounding pastures for dried cow poop and shovel it up for winter fire fuel.

That, my friends, I could do.

But there is another thing I was capable of: using my words in ways that other people won’t.

If my creative work produces only this one dinky blog post, it is one post that thousands of others won’t write, and maybe it will make a difference for someone. 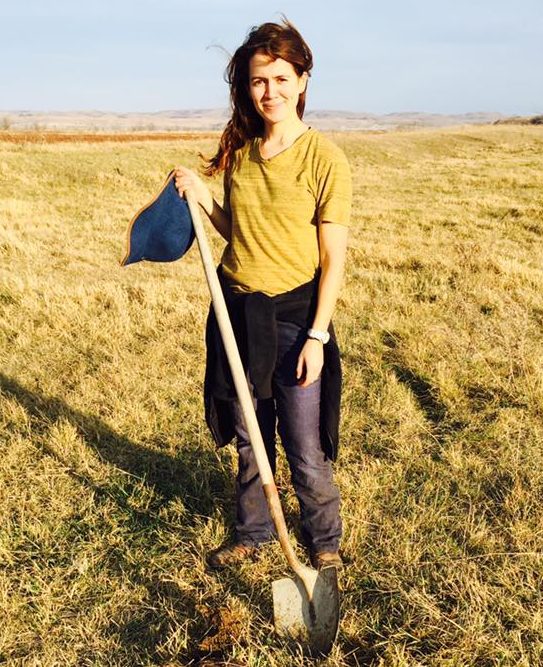 I’m an introvert, okay? Of *course* I want the most isolating task possible: shit shoveling.

Am I the Queen of Service now? God, no. I wish. Writing about creative work and service is part of my hope to hold myself accountable and remember that the world owes me nothing.

If I have any hope of taking from it, I must also be putting in. Not just where I want, but where I’m needed.

← The Standing Rock Pipeline: Facts before Takeoff Self-Punishment: Why? →